The central sewage plant in Lippstadt was built in 1986 and was designed to clean the sewage from around 130,000 residents. A great deal of electric and thermal energy is required to clean this sewage and to operate the sewage plant of the city of Lippstadt in general. The annual costs of supplying basic power and for disposing of the resulting sewage sludge are therefore high.

The patruus, which is operated using natural gas, is tasked with drying the resulting sewage sludge to a good 90 °C in partnership with a drying system. By drying the sewage sludge, it loses more than three quarters of its weight. With an annual accumulation of around 5,000 tons of sewage sludge at the sewage plant in Lippstadt alone the weight of the sludge can thus be reduced by around 1,200 tons.

But it‘s not just the weight that sinks; the volume is also reduced. This results in considerable reductions to transport costs. However, drying has an additional benefit: By removing the liquid contained within the sewage sludge, the energy value of the material increases. The resulting material is primarily of interest to thermal recyclers who can generate electric and thermal energy from it. And it could provide a solution for the period following the decision already made in politics to deactivate all German coal-fired power plants. For example, one could use the dried sewage sludge as a combustible material for the heating ovens at cement factories.

The electric energy generated by the patruus 400 covers the energy needs of the sewage plant. The 2G was installed in a container under the roof that had previously served as sludge storage without any need for maintenance.

Both combined heat and power units contribute  considerably to reducing the energy costs of the  sewage plant, thus also helping to protect the  environment. 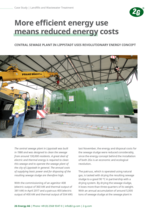 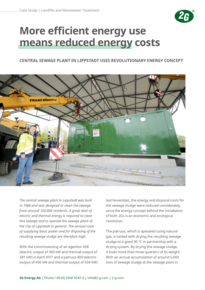 "The energy concept supported by the 2Gs is highly convincing: economically and ecologically."