A CHP by 2G supplies the Radisson Blu in Hamburg

The energy solution was implemented in cooperation with HanseWerk Natur, one of the largest energy service providers in northern Germany.

The Radisson Blu Hamburg is a superior four-star hotel and belongs to the Radisson Hotel Group with about 400 hotels worldwide. The hotel with an eye-catching facade is located in immediate proximity to the Hanseatic city‘s airport and can be accessed directly via the airport car park. 266 state-of-the-art rooms, a 1,000 m² event space and a fitness club including sauna and steam baths are available to the guests.

The technical directors of the Radisson Blu Hamburg engaged the services of the HanseWerk Natur GmbH for the implementation of a decentralized, economically efficient, and eco-friendly energy supply solution. The newest model of the g-box by 2G is the centerpiece of this solution.

HanseWerk Natur, one of the biggest energy service providers in northern Germany, supervises approximately 200 decentralized systems. For years now, the company has been relying on the 2G Group‘s force of innovation and works as a trailblazer for the innovative technologies developed by the CHP manufacturer from Heek. Hence, the HanseWerk Natur was among the first to operate a g-box 20 and an agenitor 306. And for the new model of the g-box 50, HanseWerk Natur was there from the start. They have already installed and put into service five systems of this type.

The innovative combined heat and power system has an electrical output of 50 kW (electrical efficiency of 34.5%) and a thermal output of 100 kW (thermal efficiency of 71.5%). This constitutes a significant contribution to supplying the Radisson Blu Hamburg with energy. „Due to our long-standing and close cooperation with 2G, we decided to install a 2G system for this project“, states Ronald Müller, director of HanseWerk Natur‘s technical service. „The technical characteristics of the new g-box model were another reason behind our decision, because they are unique in the market.“

We installed the new CHP in the hotel‘s central heating facility located in the adjacent car park. This measure is expected to notably lower both electricity costs and CO2 emissions. „We are happy that we are now able to produce our own energy and consequently increase our economic efficiency and environmentfriendliness, thanks to the HanseWerk Natur and the technology by 2G“, reports the Technical Director of the Radisson Hotel Group Hamburg.

With the HanseWerk Natur as energy service provider in their backyard and our reliable 2G Service providing manufacturer-quality spare parts, the Radisson Blu Hamburg has strong partners for the future on its side. 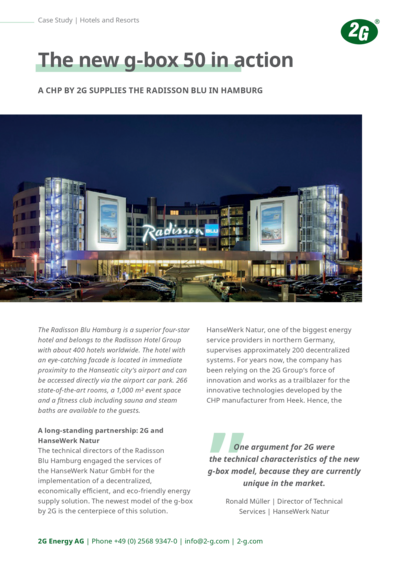 "One argument for 2G were the technical characteristics of the new g-box model, because they are currently unique in the market."