With an agenitor 408 and an aura 404, BEWITAL PETFOOD produces more than 70% of the electricity it needs in-house in a highly efficient and low-emission manner.

In 2016 the first 2G plant was put into operation with the agenitor 408. An aura 404 followed in 2019. With both CHP plants, BEWITAL petfood GmbH & Co. KG has succeeded in producing more than 70% of its electricity requirements in-house with top efficiency and low emissions.

The responsible use of natural resources and energy efficiency have always played an important role for the manufacturer of healthy pet food based in Südlohn in Münsterland. “We want to feed animals healthily while protecting the environment,” says the company‘s website. Raw materials and energy are used sparingly. Residual materials are recycled. And in production, electrical energy is used that is generated 100% from hydroelectric power, solar energy and alternative fuels. The ECOPROFIT program, which BEWITAL successfully completed as one of the first participants in 2010, also aims to save costs by protecting the environment.

Environmentally conscious production as a corporate objective
As an energy-intensive company, BEWITAL petfood is increasingly obliged to take decisive measures to reduce energy consumption in order to significantly reduce harmful emissions. A system installed for operation, machine data and energy management according to ISO 50001:2011 ensures that processes and production facilities are optimally configured for maximum performance and minimum energy consumption.

For the specific implementation of an innovative energy concept, support was sought from an external partner with relevant experience in implementing far-reaching energy concepts. The choice was made for D.E.V. Energiesysteme from Oberhausen, which had already successfully implemented numerous projects, particularly in the field of decentralized energy supply. In autumn 2015, the planner Peter Bangert from D.E.V. began to analyze the production processes and the associated energy flows at BEWITAL petfood. The analysis showed that combined heat and power generation would provide a comprehensive solution for the energy and environmental objectives pursued.

CHP Project No. 1: Primary energy use and CO2 emissions both reduced by 30%
Detailed planning of the first CHP project began early in 2016. Within the scope of the detailed planning, the decision was made in favor of the agenitor 408, which at 42.5% had the highest electrical efficiency of the CHP plants available for selection for the planned purpose. With an overall efficiency of 88.5%, the agenitor produces 360 kW of electrical and 389 kW of thermal energy.

As a result of the targeted planning, the entire plant was already put into operation on July 1, 2016. Since then, the main task of the agenitor has been to supply electricity and steam for the production of pet food at Bewital. In order to ensure that the process is suitable for production, the plant is heat-operated. This means that CHP control is based on the heat requirement of the waste heat steam generator used for steam production. The 207 kW of heat provided by the agenitor 408 generates around 210 kg of heat recovery steam per hour, which is fed into the production process.

In order to use the remaining 182 kW of recovered engine heat as efficiently as possible, two buffer storage tanks with a total volume of 10,000 liters were integrated into the CHP heating network. With the help of these buffer storage tanks, the heat requirement for the process heat in production is initially covered. The unused residual heat passes to the neighboring BEWITAL Plant 2 via a specially constructed underground heat transfer line, where it is fed to the central site heating system.

In the first two full years of production, 2017 and 2018, agenitor 408 covered more than 50% of BEWITAL petfood‘s total electricity requirements. Due to the high energy efficiency of the CHP, around 30% of primary energy was saved. Likewise, CO2 emissions were reduced by the same amount as compared with exclusively sourcing external electricity. According to the results achieved so far, the capital invested in the first CHP project will have paid for itself after about three years, despite high additional investments for heat recovery steam generators, buffer storage and heat transfer line.

Thanks to the successful realization of this CHP project, D.E.V. was commissioned to develop a comprehensive concept for a decentralized energy supply for the entire BEWITAL site.

CHP Project No. 2: Improvement to 43% less primary energy and CO2 emissions
At the end of March 2019, the first CHP plant from the expansion planning was put into operation. It is intended to replace the external electricity still required with inhouse electricity, independent of production. The choice was made for the highly efficient aura 404 developed by 2G with an electrical output of 100 kW.

The aura 404 is characterized by a very high overall efficiency of 97.4% with extremely low emissions. So the aura 404 fits perfectly into the company‘s environmentally conscious energy strategy and, with emission values of less than 50 mg/Nm³ NOX, meets the requirements for low nitrogen oxide limits. As a reliable “endurance runner”, the aura contributes to BEWITAL petfood being able to cover more than 70% of its electricity requirements with its own CHP power in the future, and a further 167 kW of thermal power is available.

A brief comparison with the 100 kW photovoltaic system from BEWITAL petfood shows how economically the aura 404 works. For an alternative power output of 660,000 kWh (100 kW x 6,600 operating hours) per year using the PV system, four times the power output of the aura 404 would be required. In addition, due to the low number of hours of sunshine (1,560 hours in 2018), an electricity storage system would have to be used in order to have the electricity available in line with demand. The bottom line is that the investments would have been many times higher than for the aura 404 CHP project. It should also be considered that the aura 404, in contrast to a PV system, contributes an additional 1.1 million kWh of heat annually.

The temporarily unused CHP power is fed into the public power grid, such that the aura can continue to run continuously even in the event of a power surplus. “In addition, it is interesting from an economic point of view that, due to the continuous operation of the aura, 100 kW of CHP power is available as soon as production starts. As a result, temporary peak loads at the start of production are 100 kW lower. This additional effect will yield the company additional cost savings of more than EUR 25,000 per year due to the lower grid tariffs,” explains Peter Bangert.

One challenge appeared to be the limited space available on site. Thanks to the compact design of the aura, it was no problem to establish the plant on an unused gallery, however.

Special attention should be paid to the environmental benefits of this project. The joint power supply by the two CHP plants can save more than 43% of both primary energy and CO2 emissions annually. 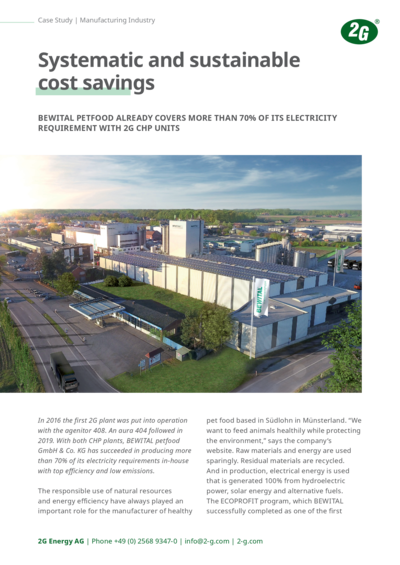 „We want to save more and more energy and CO2.“