For the first time, a hydrogen-based and zero-CO2 storage network has been created for regenerative electricity for communal use.

“The energy revolution starts small“ – Norbert  Zösch, CEO of the Stadtwerk Haßfurt GmbH utility company, sums up in a nutshell the philosophy of his company which supplies approximately 14,000 inhabitants of the Haßfurt community situated  in the Lower Franconia region of Bavaria. “Think  big“ has however been the motto of this company in terms of its transformation of its structure and services for a future based on renewable energy sources. Working together with the Städtische  Betriebe GmbH (municipal services responsible for local heating and public leisure services) as well  as the data center Rechenzentrum Haßfurt GmbH, the Stadtwerk Haßfurt GmbH is part of the triad  responsible for operating public services.

The focus in adapting to the challenges of the  energy revolution was on the four megatrends: demography, digitization, decarbonization and  last but not least decentralization. Stadtwerk Haßfurt recognizes that the process of decentralization, which is regarded as necessary to secure future compatibility, poses its own major challenges. Firstly, the indisputable fact is that a safe and economically competitive power supply based on renewable energies  is achievable with cogeneration technologies by using storage units. However, the issue of heat supply has not been overlooked because a significant part of the heating needs for local heating in the municipality is supplied by regenerative sources by using waste heat from the biogas plant (2.35 MW), the solar panels and other renewable energy plants.

Mixture of generation technologies with power to gas
The electricity balance of the municipal utility company of Haßfurt from 2010 to 2017 recorded an exponential growth in renewable power generation. The figure started at 29 percent  but by 2015 had reached 100 percent and with approximately 85,000 MWh generated in 2017, the figure had increased to 208 percent. Around 70,000 MWh of the total was generated by solar and wind energy. In terms of maintaining a safe supply of power, the quantum leap in power generated by wind power, which increased from 2,400 MWh in 2010 to approximately 61,000 MWh in 2017, meant that Stadtwerk Haßfurt faced new challenges.

Back in October 2016, the Windgas Haßfurt GmbH & Co. KG – a joint venture between Stadtwerk Haßfurt and the Greenpeace  Energy eco-energy association in Hamburg – commissioned a new power-to-gas plant (PtG). At the heart of this plant is a container-size PEM  electrolyzer, type Silyzer 200 from Siemens with a 1.25 MW peak output. The cutting-edge  plant located at the Mainhafen converts excess power from the nearby community wind park  in Sailershäuser Wald as well as from other  wind energy and solar plants into renewable hydrogen, otherwise known as wind gas. The  electrolyzer produces one million kilowatt hours  of eco gas each year which is fed into the gas grid for almost 20.000 pro-wind gas customers of Greenpeace Energy. It can be stored there for a relatively long time and converted into electricity again later.

In this respect, wind gas plants like the one in Haßfurt are an important element in securing a successful energy revolution: They allow the long-term storage of enormous quantities of renewable energies and ensure a safe supply even with large volumes of renewable energies. Elektrolyzers based on PEM technology (PEM = polymer electrolyte membrane) convert excess wind and solar power with an efficiency of approximately 70 percent into hydrogen and  therefore ensure that every single kilowatt hour of green electricity is used and the renewable plants do not have to be shut off if the amount of power exceeds demand or the grid cannot save the power.

The container-size PEM plants react extremely quickly because the electrolyzer is capable of automatically changing its output within milliseconds to stabilize the frequency in the grid to prevent, for example, blackouts caused by a grid overload. In Haßfurt, the electrolyzer is able to provide this power as part of a “virtual  power plant” operated by the partner Next Kraftwerke where several plants are connected together. This “balancing power service” allows electrolyzers to not only produce hydrogen but to generate revenue as well. The plant, which did not receive any funding, cost around two million euros in total. “The business model of Windgas Haßfurt GmbH is based on the idea that the investment costs are amortized within ten years”, Norbert Zösch, CEO of Stadtwerk  Haßfurt GmbH, explains the economic principle  behind the investment.

Electrolysis involves separating water into oxygen – which is discharged into the ambient  air – and hydrogen with a high degree of purity. In the PEM electrolyzer in Haßfurt, this process is conducted at a temperature of between approx. 30 and 70 °C at a pressure of 35 bar. The gas is then dried to remove as much moisture as possible. A water treatment plant demineralizes the water before it is fed into the electrolysis stacks where the actual electrolysis process takes place.

Advent of a new era of technology with the commissioning of the first-ever hydrogen  CHP
The successful commissioning of a highly innovative hydrogen combined heat and  power plant (H2 CHP) for the reconversion of regenerative hydrogen in June 2019 enabled  Stadtwerk Haßfurt to extend its power-to-gas plant (PtG). The project was funded by the  Bavarian State Ministry of Economics, Regional Development and Energy (StMWi). The installed CHP is an agenitor 406 H2 from 2G with an electrical output of 140 kW operated with hydrogen. Project partners include Stadtwerk Haßfurt GmbH, 2G Energy AG based in Heek and the Institute for Energy Technology (IfE) at the University of Applied Sciences in Amberg-Weiden, East Bavaria.

In contrast to the previous method of the addition of hydrogen into the natural gas grid with a regeneration using conventional CHPs, the new combined heat and power plant enables operation with pure hydrogen without the addition of any fossil fuels. For the first time, a hydrogen-based and zero-CO2 storage network has been created for regenerative electricity for communal use. Now that the plant has been in operation for over a year, it can be confirmed that the system meets all the high expectations in terms of availability and profitability.

Flexible response to excess or low power supply
Norbert Zösch evaluates this completion of the storage chain as an important contribution to balancing power generation with demand: “Both the PtG plant and the H2 CHP deliver dynamic results which mean that the entire system, electrolyzer – storage – H2 CHP, can compensate for surplus and low amounts of power from renewable power generation by balancing power locally or, on the higher level, with balancing energy in the distribution grid.”

2G Energy AG delivered the CHP agenitor 406  H2 as a turnkey container solution. Frank Grewe, CTO of 2G Energy AG, expects an increase in demand for the H2 CHP: “After the first installation of a H2 CHP at the BER airport in Berlin in 2012, we took the next step in Haßfurt  of installing a standard CHP from the agenitor series which can be adapted at low cost for use of either pure hydrogen, a hydrogen/natural gas mixture or just natural gas. The safe and flexible operation as part of a wider use of PtG  concepts with CHPs in the future is an integral part of the development work at 2G.”

Other contracts such as the commissioning of a H2 CHP for Siemens in 2019 for a project on the Arabian peninsula and for the plant specialist APEX based in Rostock as well as for the “Neue  Weststadt Esslingen” housing development site in 2020 all confirm this expectation with regard to market development.

The H2 CHP in Haßfurt is fitted with a second gas connection for a switch to natural gas operation where the electrical nominal output is 200 kW. Frank Grewe sees even  further development potential for H2 CHPs in comparison to natural gas operation: “One short-term development goal is to significantly increase the nominal output in hydrogen operation up to the same level as engines operated with natural gas. Besides safer plant availability, development at 2G also focuses on the further reduction of specific production and  operating costs of H2 CHPs.”

In terms of scientific and technology input, the project is supervised by the Institute for Energy Technology at the University of Applied Sciences in Amberg-Weiden, East Bavaria. What do the researchers hope to gain from this project? Well, on the one hand, practical knowledge and long-term experience on hydrogen operation of combined heat and power plants, and on the other, the module is intended to be used as a research platform in the consortium for further developments to H2 CHP technology and was therefore fitted with special measurement access points.

Awarded for trailblazing in the industry
Although on a national scale the energy revolution has lost ground or come up against obstacles in many different areas along the way, such as with regard to the installation of wind power plants or the expansion of distribution grid networks, a relatively small public utility service such as in Haßfurt shows that the energy revolution is possible by taking a decentralized approach. This concept has proved a success because it not only involves the suppliers but the consumers as well via the  public heating network. So-called blackouts can be avoided effectively using a battery storage (8 MWh) and two other storage units. The extensive rollout of 10,000 smart meters between 2008-2011 and the integration of  household grids as part of “prosumer” projects  with “electricity-generating heating systems” have helped raise the acceptance amongst  citizens. Without this high level of acceptance among customers, it would surely not have  been possible to be a trailblazer in the energy revolution. Haßfurt has a right to be proud of the numerous awards it has received including the Bavarian Energy Prize in 2018 or being named as the “Pearl of the Energy Revolution” by the Heinrich Böll Foundation. The “icing on the cake” was the “CHP of 2019” award voted by the jury of the B.KWK Bundesverband Kraft-Wärme-Kopplung e. V. (National Cogeneration Association) and the ‘Energie & Management’ trade magazine in recognition for the futureoriented investment decision of Stadtwerk  Haßfurt. 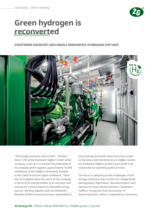