Thanks to the new CHP, the integration of the steam generator into the line of the extracted heat and the more efficient refrigerating system, about 3,600 tons of CO2 emissions are avoided every year

Heat, cooling and electricity - dairy processing constantly requires vast amounts of energy. This is due to processes like the pasteurization, the refrigeration of raw milk and milk products, the operation of separators or of the homogenization machines that happen around the clock in most dairy processing businesses. The factory of the Privatmolkerei Naarmann GmbH located in Neuenkirchen is also active on all seven days of the week and makes approximately 200,000 tons of raw milk per year into UHT milk, cream, sauces, puddings, concentrates, powders, and many other products that are mainly intended for bulk consumers, the restaurant sector, the food industry or destined for export.

Cogeneration covers the constant demand for heat and electricity

The simultaneous and constant demand for electrical and thermal energy throughout the year creates optimal conditions for the use of combined heat and power systems (CHP). That is why Naarmann has already been relying on a natural gas CHP by 2G for ages: A patruus 400 has been in use on the company site since 2014. Set up in a sound-insulated highline container, it supplies the factory with an output of up to 400 kWel and 504 kW thermal. The heat is led to the consumers or temporarily stored in a buffer tank with a capacity of 100 m³ – to extract the heat during load peaks – at supply and return temperatures of 95 °C and 75 °C respectively.

“Operating our own CHP system as opposed to purchasing electricity and heat separately from external suppliers does not only increase our economic efficiency, but it also lowers CO2 emissions overall“, explains Matthias Kemper, who is responsible for the energy systems at Naarmann. However, he also reports that the energy demand has increased with the expansion of production capacities over the past few years. “This is why we wanted to exploit further opportunities to raise efficiency.“

Increased efficiency by combining cogeneration with a steam generator

In 2018, Naarmann wanted to refine the proven principle of combined heat and power generation: The new systems were supposed to provide electricity and high levels of heat as well as refrigeration. To this end, Kemper wanted to combine the cogeneration technology with an absorption refrigerating machine as well as the generation of hot steam for the ultra-high temperature processing. At the same time, management wanted a solution with an elevated electrical output since the electricity produced by cogeneration on site is much cheaper than purchasing it from a supplier.

The elevated requirements regarding efficiency were pivotal in the decision to once again let 2G supply the CHP. „It‘s not only the efficiency that hits the sweet spot – the systems also convinced us with their enormous electrical output“, Kemper, who took charge of the project, explains the decision. “Obviously, there were also soft factors such as a good After-Sales Service in favor of 2G“, adds the energy manager as he remembers: “The engineering team of 2G remains available even after the commissioning and with the older CHP, for example, this enabled us to optimize the heat extraction even after the commissioning was performed successfully.“

This time, the planners chose the CHP models agenitor 408“ and avus 500plus who were then installed in acoustically insulated containers as well – they are operating without problems for about a year now. The sound insulation reduces noise levels during operation to about 45 dB(A) at ten meters which was of particular importance to Naarmann, due to the facility‘s proximity to neighboring residential buildings. The agenitor 408 provides around 360 kWel and converts approximately 42.5% of the primary energy contained in the fuel into electricity. It also produces up to 381 kW of thermal energy. The second new CHP, an avus 500plus, has a similar electrical efficiency, but offers even more power – in this case up to 550 kWel and 578 kW thermal.

Unlike the patruus CHP, the two new systems are geared towards the production of electricity. The objective: minimizing the amount of electricity purchased from external providers. This was among the arguments in favor of acquiring two CHP with a combined electrical output of approximately one megawatt. Now, the electricity production capacities are so great that notable electricity purchases are only necessary during peaks in demand or when the CHP are being serviced. Another advantage of selfsufficiency is that suppliers and grid operators have to reserve less capacity, which has a positive effect on the charges. Combined with a planned peak load management system which uses the newly installed ice storage system as buffer and thus avoids spikes in electricity consumption by the refrigerating technology a lot of money can be saved.

In the spirit of maximized efficiency, the new CHP are practically running without pause but not always at peak load. How much power is made available is dictated by the zero feed-in control. It regulates both machines to make them follow the electricity demand curve as closely as possible. This control method also ensures an equal load distribution. This means that the operating hours and the wear are distributed evenly among the power units. Thanks to a remote access function for authorized users via internet integrated in the control system, the condition of the power units can be monitored remotely by the operator, an energy manager in this case, and the technicians at 2G.

Self-production covers 92% of the electricity requirements

One year has passed since the commissioning of the two new combined heat and power systems and Kemper‘s concept has already been validated. The zero feed-in control mode operates with extreme precision: 97.6% of the capacities for self-produced energy are being used - despite occasional maintenance works. Additionally, the degree of self-sufficiency increased massively, With the new systems that were financed with subsidies from the European Agricultural Fund for Rural Development, Naarmann can now cover 92% of its own electricity demands. “And it‘s also good for the environment“, says Kemper. “Thanks to the new CHP, the integration of the steam generator into the line of the extracted heat and the more efficient refrigerating system, about 3,600 tons of CO2 emissions are avoided every year.“ 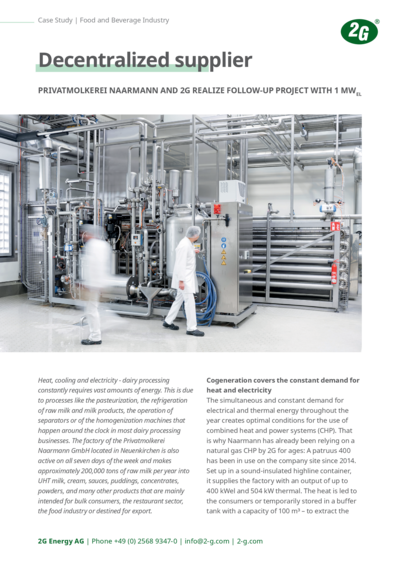 "The engineering team of 2G remains available even after the commissioning."