They were not only looking for an energy source to generate power for basic operations, they were also looking to supply refrigeration to the beer in order to cool it to 0 to 1 °C.

The Privat-Brauerei Zötler GmbH is a brewery in Rettenberg in the district of Oberallgäu. Founded in the year 1447, it is one of the oldest family breweries in Germany. Around 65,000 hl of various types of beer are produced annually. The energy costs to provide the basic power to operate it are some of the largest cost items for the brewery in addition to personnel and raw material costs. Zötler therefore looked for an opportunity to generate its own energy, independently and more efficiently. However, they were not only looking for an energy source to generate power for basic operations, they were also looking to supply refrigeration to the brewed beer in order to cool it to 0 to 1 °C.

“After a long search for a CHP manufacturer that could face this challenge, we came into contact with 2G,” explains Production Manager Markus Würz. In the end, the g-box 50, which was already part of the 2G product portfolio, was refined into a high-temperature variant and brought into operation in October 2017. Project planning was handled by the Geiger Group.

The complete module (g-box 50 HT) has an inlet temperature of 95 °C with an electric output of 50 kW and a thermal output of 85 kW. The power generated by the g-box 50 is used in its entirety by the brewery, thus fully utilizing the device. The thermal energy is fed into an absorption chiller from the Zimmerman company, which in turn uses the high thermal energy to generate refrigeration of up to -5 °C, cooling down the beer. The results are plain to see: The brewery saves around 400,000 kWh annually with the new investment of a g-box, which is almost half of its power needs. In addition, the chiller can be relieved of 60,000 to 80,000 kWh with the help of this absorption refrigeration system. The g-box 50 HT thus reduces annual CO2 emissions by around 135 tons. This, in turn, not only reduces the brewery‘s production and operating costs, but also protects the environment. 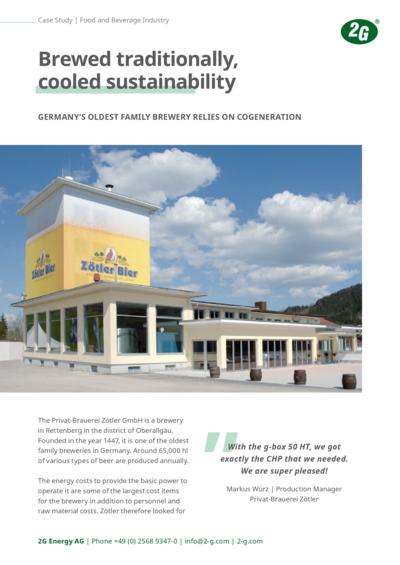 "With the g-box 50 HT, we got exactly the CHP that we needed. We are super pleased!"